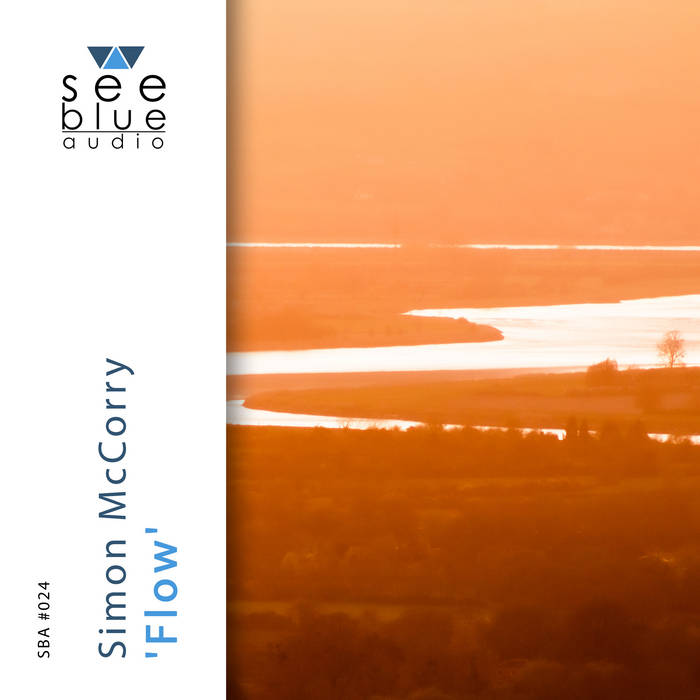 Simon McCorry provided the first release of 2021 on See Blue Audio, the ‘Nature in Nature’ EP, so it seems appropriate that his next contribution to the label comes at the end of summer as the nights begin to draw in. The four tracks of ‘Nature in Nature’ contained contrasting moods and studio techniques, and reflected a wide range of influences, whereas on this new release, ´Flow’, Simon directs his sonic gaze on the ambient side of his creative palette. Electronically produced it may be, but ‘Flow’ is also deeply rooted in nature and its mythology, and for the twenty-fourth release on See Blue Audio he has fashioned a richly autumnal, eventide collection of music.

Part-Indian, part-British and based in Stroud in the UK, Simon describes himself as a “cellist sound-sculptor of ambiguous environments.” 2021 has already seen three major releases in the ‘And Where Are You Really From?’ solo album on Polar Seas Recordings alongside collaborations with Toronto-based guitarist anthéne (Brad Deschamps) on ‘the equation of time’ for Whitelabrecs, and fellow Stroud musicians Andrew Heath and Phonosonic as Konstruct with ‘Three (squared)’ on Rusted Tone Recordings. Solo projects and further collaborations are also forthcoming on Hush Hush Records, Whitelabrecs, Rusted Tone, Woodford Halse and Hidden Vibes later this year, as well as a return to live performances, and sound design and film score projects. ‘Flow’ sits neatly in-between this body of work, while occupying its own unique place in time and space.

‘Flow’ consists of five beatless sonic landscapes of varying length and without specific titles, but with subtle changes in movement and atmosphere. As the title suggests, the music can be experienced as a river that is visited at different locations as it travels along its course. All five originate from a single improvisation using Eurorack modules. The stems were then passed to cassette tape and underwent further processing to create a degraded feel, rather like something buried under millennia of peat and then uncovered at a future date. Peat gives a clue to their origins and a recent trip to the Isle of Harris in the Outer Hebrides.

This world of weather-beaten moorland and rocky crags conjured up images of ghostly figures, which took the form of stones that had been left over from the Ice Age by passing glaciers. Their presence felt so human to Simon and profoundly eerie, particularly at sunset when these stones would play tricks upon the eye as if performing the role of watchers, both of earth and the celestial world above. Thus, a connection was formed – a single line or an axis - rooting the human world with that of Planet Earth and the heavens. In one sense, these stones, or what lies beneath them, contain something that is buried and gradually degrading over time beyond measure, but in another sense, they remain silently waiting to be uncovered and reanimated.

In fact, it’s not just this visit to the Isle of Harris that provided such dynamic inspiration; it followed similar experiences and chain of thoughts after similar trips to stone circles in the Lake District and the islands of Orkney. On returning to his studio in Stroud, Simon began the process of musical distillation of these ideas that has finally found form in ‘Flow’. It may well be appropriate to use adjectives like immersive and deep listening to describe the end result – perhaps even contemplative or metaphysical – but elegant and melancholic could equally apply. Such words can also be used to describe a river and the passage through life it symbolises with its constant flow.

All tracks written, produced and mixed by Simon McCorry.