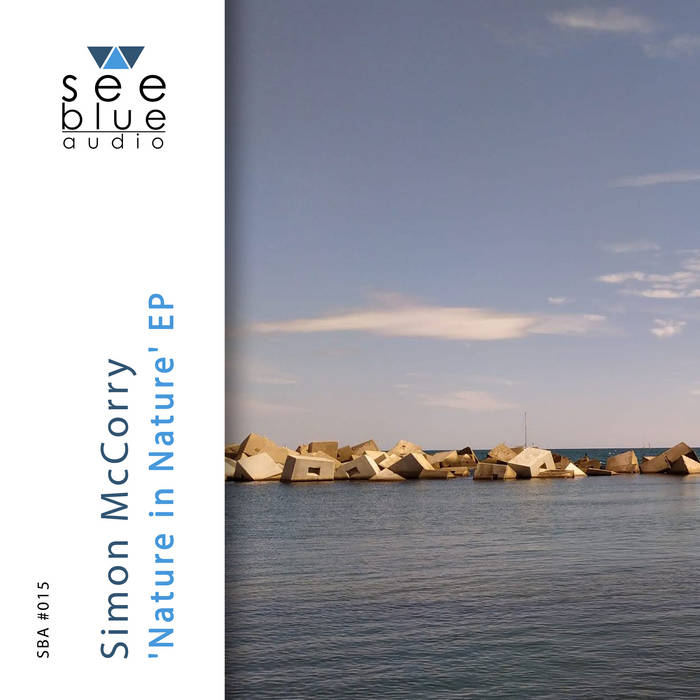 Roland Pyle These tracks seem to me to tell us wonderful stories about the ways that living systems create and recreate themselves. The tales that unfold so beautifully are about the web of life and the hidden connections which are so important for the future of the world we share. (PS: I'm not a musician so haven't got the vocabulary to describe the sounds: I just know they're wonderful!) Best wishes. Roland

For the first release of 2021 and the fifteenth on the label, See Blue Audio welcomes a new artist: Simon McCorry with the 'Nature in Nature' EP. The name may well be familiar to followers of the ambient and experimental music scenes following a string of releases on his own Close Recordings imprint. There has also been music on labels like Disco Gecko, Naviar and Herhalen, while 2021 will see releases on Fallen Moon, Polar Seas and Rusted Tone as well as See Blue Audio alongside collaborations with Anthéne for Whitelabrecs, and as part of Konstruct with Andrew Heath and Alexander Caminada (Phonsonic) for Rusted Tone. Press coverage of Simon's work has come from the Quietus, Mojo, Monolith Cocktail, Dancing About Architecture and the Sunday Experience, and radio play on BBC Radio 3 and Radio 6.

Part-Indian, part-British and based in Stroud in the UK, Simon describes himself as a “cellist sound-sculptor of ambiguous environments.” The ambiguous environment he explores on the four tracks of 'Nature in Nature' are drawn from the electronic side of his palette, but the influences and techniques of other forms from his musical range, including his training and career as a professional cellist, are also present. A rich combination of field recordings, adept loop-based cello compositions and atmospheric improvisations have given Simon the tools to fully exploit the sonic possibilities of the cello through a host of treatments, effects and analogue modular synthesis. From droning stillness and thrilling harmonic simplicity to abstract microtonal atmospheres, his music references the post-classical work of artists like Silver Mt Zion and Stars of The Lid. These combine with influences as varied as Aphex Twin, Jon Hassell, King Tubby and Lee ‘Scratch’ Perry, and 20th century composers like György Ligeti and Pauline Oliveros.

All of which leads to the 'Nature in Nature' EP, which was recorded in the latter half of 2020. Three of these sonic explorations were created using analogue modular synthesis and without the computer as a sequencing tool. The opening track, 'Background Thermal Radiation', draws on the swirling patterns of late-night static from the distant days of cathode-ray tube television, where patterns could be detected amongst the chaos, and a kind of dark energy is summoned into musical form. Simon has described the creative process as something akin to divination, perhaps even shamanic, and there is a strong sense of him tapping into something primordial here.

The title track follows with 'Nature in Nature' originally commissioned by Japanese contemporary dance artist Satoko Fukuda for her short film of the same name. As the title suggests, nature plays a central theme in both the video and accompanying soundtrack from Simon, but he has taken his sound sources from man-made materials associated with his childhood growing up in London that have been abandoned and then reclaimed by nature. Sounds generated from scrap metal and wood, and a mini-cassette dictaphone combine with the cello to create a delicate but vibrant musical tapestry. 2021 will hopefully see Simon visit Japan for further collaborations with Fukuda, and the video is available on her YouTube channel.

Prometheus, the pre-Olympian god who gave fire to humans and was brutally punished by Zeus, supplies the theme for the third track bearing his name, and this brooding, slow-motion soundscape contains elements of both fire and ice. If the music so far has been predominantly beatless, this changes with 'Entanglement', which closes the EP, where Moog-style sounds lead into the beats and chimes of some kind of otherworldly clock; its ghostly quality perhaps hinting at another of Simon's influences from the early days of electronic club culture and techno.

With the 'Nature in Nature' EP, Simon McCorry explores the interface between the natural world with its myriad sounds and harmonies, and the strange unpredictably of human life, which is always in a state of physical and spiritual migration. Mainly improvised, strangely romantic, occasionally gothic, and built around the quirkiness of analogue circuitry rather than binary code, this is a particularly apt soundtrack to open a new year where uncertainly and anxiety still preside.

All tracks written, produced and mixed by Simon McCorry.